With the 2017 World Series thriller behind us, how can you not help but already miss baseball?  The excitement and anticipation of a World Series Game 7, usually with less than 24 hours since the previous game ended, is unlike anything in sports.  A game known for its easy-going, casual pace and ‘we’ll get ’em tomorrow’ attitude, with a season 162 games long, plus playoffs, suddenly comes down to one frantic contest with everything on the line.  During the 1970s, half of the Fall Classics came down to the final winner-takes-all game.  Here’s how those five games unfolded:

The pitching rich-Baltimore Orioles, fortified with 4 20-game winners in their rotation, looked to defend their 1970 crown against the Pittsburgh Pirates.  Baltimore was coming off their third straight American League pennant, and had taken care of Cincinnati in just 5 games the year prior.   It looked like more of the same when the Birds took the first two games at home, but the Pirates stormed back with three straight wins in Pittsburgh.  Game 6 was a tense affair, decided by a 3-2 margin the bottom 10th on a Brooks Robinson sacrifice fly.  The home team had taken each of the first 6 games, a trend Baltimore was hoping would continue in the finale.

In Game 7, the Pirates’ ace Steve Blass locked up in a pitchers’ duel with the O’s Mike 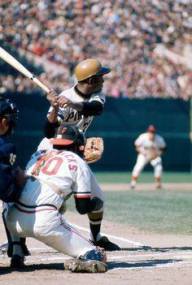 Cuellar, who Blass already beat in Game 3.  The game was scoreless after 3 innings until Roberto Clemente reached Cuellar, who retired the first 11 batters he faced, for a go-ahead solo homer to left in the top 4th.  The score stayed 1-0 through 7 innings, as each club managed just two hits apiece, with no runners advancing past second base.  In the 8th Pittsburgh tacked on a crucial insurance run when shortstop Jose Pagan doubled home Willie Stargell, who had just singled.  Baltimore mounted their best threat of the day in the bottom of the frame- consecutive hits by Elrod Hendricks and Mark Belanger followed by a sacrifice bunt to put runners at 2nd and 3rd.  But Blass limited the damage by inducing a run-scoring groundout from Don Buford, and then Davey Johnson tapped out to shortstop to end the inning, stranding the go-ahead runner, Belanger, at third.  The Orioles went quietly in the 9th, not managing a ball out of the infield as Blass wrapped up a complete game 4-hitter in the clincher.

Oakland, playing without their star right fielder, Reggie Jackson, who tore a hamstring stealing home in the final game of the ALCS, took the first two contests at Riverfront.  The Reds responded by winning 2 of 3 one-run games in Oakland, then back at home, evened the series at 3 wins each with a convincing 8-1 margin in Game 6.

In the first inning, Gene Tenace bounced a 2-out RBI single off Cincinnati starter Jack Billingham to score Angel Mangual, who had reached on a Bobby Tolan error.  Meanwhile, Blue Moon Odom tossed a perfect first three innings, and survived two walks in the 4th to hold the one-run difference.  But Tony Perez opened the bottom 5th with a double to left, and after two more free passes ended Odom’s day in favor of Catfish Hunter, Perez scored on pinch-hitter Hal McRae’s sac fly. 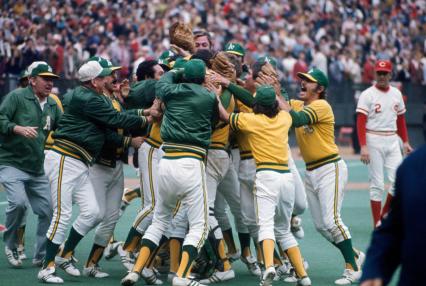 In the 6th, eventual series MVP Tenace wrapped out another 2-out hit, a double to score Bert Campaneris with the go-ahead run against Pedro Borbon. Then Sal Bando’s RBI double scored Tenace.  Hunter worked into the 8th, when Ken Holtzman relieved him after a leadoff single to Pete Rose.  Joe Morgan’s double chased Holtzman out of the game, and advanced Rose to third.  Rollie Fingers allowed Rose to score on a sacrifice fly, but settled in and held the lead with two innings of hitless relief to give Oakland the title.

Oakland found themselves on the brink to the underdog Mets by losing 2 of 3 at Shea Stadium after the clubs split the first two in Oakland.  But they rallied for a 3-1 win over Tom Seaver (pitching on short rest) to set up a rematch of lefties Ken Holtzman and Jon Matrlack, who had battled in an A’s 2-1 win in Game 1.

An uneventful initial 2 ½ innings took a sudden turn on a Ken Holtzman double, his

second of the series, and just as in Game 1, it set the stage for a rally.  Leadoff man Bert Campaneris followed with a homer, with one out Joe Rudi singled, and Reggie Jackson delivered another homer that put Oakland up 4-0.

The Mets scored in the 6th on a Rusty Staub double, and threatened in the 9th, when John Milner came home on an infield error, putting runners on the corners with 2 out.  Darold Knowles, pitching in his 7th game of the series, was brought on for Rollie Fingers to face the lefthanded hitting Wayne Garrett, who represented the tying run.   Garrett popped up on the infield to make the final 5-2, giving Oakland back-to-back championships

The best Fall Classic of the decade was sent to a 7th game after the Red Sox’ Carlton Fisk hit a dramatic game-ending, series-tying 12th inning homer the night before.

Boston took a 3-0 lead in the 3rd against the Reds, when Carl Yastrzemski singled in a run and Reds’ starter Don Gullet walked in two more.  Cincinnati finally countered in the 6th on a two-run homer from Tony Perez off Bill Lee, then Pete Rose singled to center off reliever Roger Moret in the 7th to tie the game.  Joe Morgan’s 2-out RBI single in the top of the 9th scored Ken Griffey and provided the winning margin.

Jack Billingham, Clay Carroll and Will McEnaney combined for 5 scoreless innings of relief.  It was Cincinnati’s first World Championship since 1940. 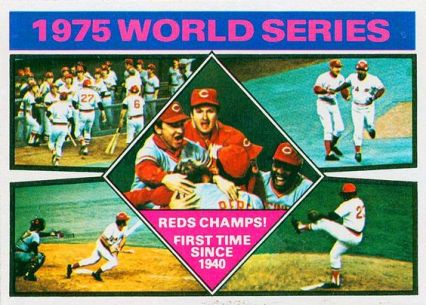 The same two clubs from the 1971 Fall Classic had met exactly 8 years later for another Game 7 at Memorial Stadium in Baltimore.  Just four days earlier the Orioles had taken a commanding 3-1 series lead, but from that point, it was all Pirates, who won 7-1 at home and then forced the deciding contest with a 4-0 combined shutout from John Candelaria and Kent Tekulve in Game 6.

Baltimore opened the scoring when second baseman Rich Dauer reached Jim Bibby for a homer to lead off the bottom 3rd.  Lefty Scott McGregor held Pittsburgh scoreless until Willie Stargell’s 2-run homer in the 6th gave the Bucs the lead; it would be the only blemish against McGregor over 8 innings of work.  Baltimore loaded the bases in the 8th with 2 out, but with Kent Tekulve on in relief again, Eddie Murray’s home run bid fell just short as Dave Parker hauled it on the warning track.  Pittsburgh tacked on 2 more runs in the 9th off 5 Baltimore pitchers, led by Omar Moreno’s RBI single.  Tekulve pitched a perfect bottom 9th to wrap it up. 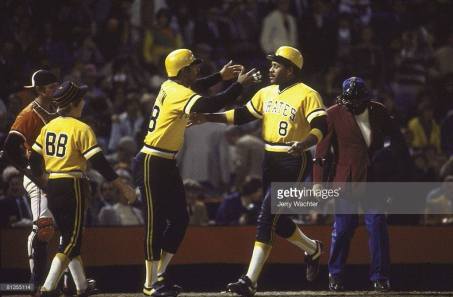