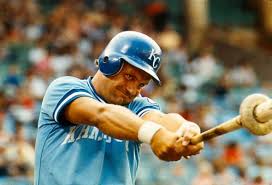 George Brett’s Hall of Fame plaque begins, “Played each game with ceaseless intensity and unbridled passion”.  This is the highest compliment any athlete can receive, and one that can be said of few modern-day players.  In my mind, nothing demonstrates this more than Brett’s ALCS performances against the Yankees from 1976-78, and in particular, on October 6, 1978, when he crushed 3 home runs.  Brett was the ultimate  gamer – in the post season he played even better than his normal superstar level.

Brett entered the 1978 ALCS a lifetime .305 hitter who had won the 1976 batting title and averaged 8 home runs a year, with 9 during the 1978 regular season.  With the Series tied 1-1, the Royals faced the Yankee’s big-game pitcher Catfish Hunter, and Brett led off Game 3 by taking a high fastball into Yankee Stadium’s upper deck in straight away right field.  In the 3rd inning Catfish stayed off the fat part of the plate, but Brett broke a 1-1 tie anyway, on a low and away pitch with a 400+ foot bomb to right center.  He came up in the 4th with 2 out, the same 2-1 score, and team-leading base stealer Freddie Patek on first base.  Patek was nailed trying to swipe second, taking the bat out of the red-hot Brett’s hands.  After the Yankees took a 3-2 lead in their half of the 4th, Brett led off the 5th.  Hunter gave him a big curve on the outside corner at the knees – no matter, Brett was in that kind of zone – he reached out and pulled it over the right field fence to tie the score.  Brett flew out in his last two at bats against Goose Gossage, and the Yankees rallied to win the game, 6-5.  They wrapped up the Series and another pennant the next day.

By 1978 Brett was no stranger to the Yankees in the ALCS – he was a recurring nightmare.  He averaged .444 in the 1976 ALCS, including a game tying 3-run homer in the 8th inning of Game 5 before the Yank’s Chris Chambliss hit the famous walk-off game winner in the 9th.  In 1977 Brett hit .300 against New York, with his biggest blow a Game 5 first inning RBI triple that touched off a bench clearing brawl between Brett and Graig Nettles.  The Royals went ahead 2-0 and then 3-2 before losing the lead on a 3 run Yankee 9th inning.

The last sentence on Brett’s plaque – “A clutch hitter whose profound respect for the game led to universal reverence”.  Just ask the Yankees.