On July 31, 1972, the White Sox’ Dick Allen, in the midst of one of the greatest seasons any player had in the 1970s, smashed not one, but two inside-the-park home runs against the Twins and their 21-year-old future Hall of Fame pitcher, Bert Blyleven.

Acquired from the Dodgers for pitcher Tommy John in December 1971, Allen was the 1972 American League All-Star first baseman, and entered the game batting .308. 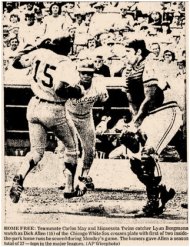 The fireworks began early – speedy right fielder Pat Kelly led off the game with a walk, and advanced to second on a single by second baseman Luis Alvarado.  Dick Allen came to the plate next, lashing what appeared off the bat to be a line drive single, but the ball handcuffed center fielder Bobby Darwin, who dropped to his knees to knock it down, only to have the ball bounce over him and all the way to the wall 430 away from home plate.  Kelly and Alvarado scored easily, and Allen made it home ahead of the relay throw standing up, giving him his 6th career inside-the-parker, and first since 1966.  3-0 White Sox lead.

The score was still 3-0 going into the 5th inning,  but the Sox tacked on another thanks to a Pat Kelly double and an RBI single by the normally light-hitting Alvarado, a .213 hitter that year.  Allen, who had struck out looking in the 3rd, came up next and smoked a shot into the left center field gap.  Darwin, perhaps thinking he could catch it cleanly, went after it full speed, and when he realized he would not reach it on a fly, tried to backhand it off the first hop like a shortstop.  It instead went under his glove, rolling to the fence as Darwin took a few more steps to his right before he could reverse his path and chase the ball down.  The relay was again too late as a sliding Allen gave the Sox had a 6-0 lead, sending Blyleven to the showers.

The normally reliable Darwin played the role of court jester, complaining “his balls come at you like knucklers; he’s the only one who can hit balls that behave like that”.  Chicago manager Chuck Tanner concurred, “He hits knuckleballs out there.  This is the fifth or sixth centerfielder he’s handcuffed.”  Hitting coaches say a ball hit perfectly square produces little to no spin and behaves like a knuckleball.  Combine Allen’s barrel accuracy with his brute strength as he ripped a 38-40 ounce bat through the zone, and you have a recipe for destruction.

It was part of a magical year for Allen.

On June 6th, Allen, who had barely missed an inning all season, was given a game off for the second game of a doubleheader off against the Yankees.   Trailing 4-2 in the bottom of the 9th, Tanner had a bat boy find Allen in the clubhouse, where he sat eating a chili dog.   Allen remembered. “I had chili all over my shirt so I put on a new one and a pair of pants with no underclothes.”

Working the count to 1-1, Sparky Lyle’s slider did not slide, and Allen deposited it 370 feet away into the left field seats for a 3-run homer, giving the Sox a 5-4 walk-off win and a doubleheader sweep in front of a delirious capacity Comiskey Park crowd of 52,000. 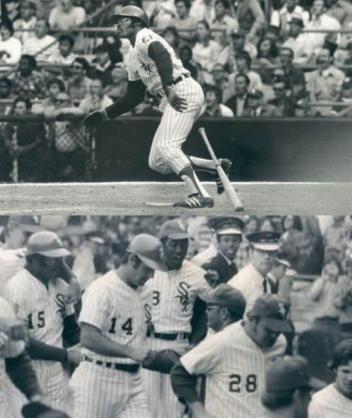 Allen challenged for the triple crown that year, leading the AL in hitting into September.  The White Sox improved from 79 to 87 wins, finishing in second place 5 ½ games behind eventual World Champion Oakland.   Allen was the American League Most Valuable Player, hitting .308 while leading the league in home runs (37), RBI (113), walks (99), OBP (.420), and slugging (.603).

Dick Allen hit .292 in his career with 351 homers.  He was the 1964 Rookie of the Year, a 7-time All-Star, topped 30 homers 6 times, and led the league in slugging 3 times.   He also had numerous attitude and off the field issues, which eventually hurt his Hall of Fame chances.

“Richie Allen,” Willie Mays once said, “was and still is, a Hall of Famer as far as I’m concerned.”

After the two inside the park home run game in 1972, Chuck Tanner said, “I believe Dick Allen is the best player in the major leagues”.

One thought on “Dick Allen’s Mad Dashes Around the Bases”