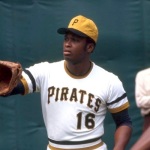 So many individuals in and out of baseball were touched and influenced by the talent and humanity of the great Roberto Clemente.  One of his closest protégés was Al Oliver, an outfielder/first baseman from Portsmouth Ohio, who was drafted by the Pirates in 1964 and made his major league debut in 1968.  Al lost his mother as a young boy at the age of 11, and his father passed away the same day he was called up to the big leagues.  He was raised by his parents to believe in his abilities, and the former college basketball recruit brought that confidence with him to the baseball diamond.

Oliver was in the mold of strong hitters who made their way through the organization and eventually into the “Pittsburgh Lumber Company” lineup.  Young players in the Pirates’ system were taught to be aggressive first-pitch fastball hitters. The original cast consisted of Clemente, Willie Stargell, and 1966 batting champion Matty Alou, and by the early 70s Oliver, catcher Manny Sanguillen, first baseman Bob Robertson, third baseman Richie Hebner, and outfielders Richie Zisk and Dave ‘Cobra’ Parker were eventually added, giving the Bucs a lineup no pitcher looked forward to facing.   Pittsburgh finished in the league’s Top 5 in runs scored for 9 consecutive seasons.

Oliver’s official rookie season came in 1969 and he hit .285 with 17 home runs, finishing second in the Rookie of the Year voting.  After a solid sophomore campaign where Oliver drove in 83 runs, he was sent to play in the Puerto Rican winter league, with none other than Clemente as his manager.  Under the tutelage of one of the best defensive outfielders in the game’s history, Oliver, who had been frequently moved around between first base and the corner outfield spots,  was groomed to play center field.   This accomplished, the Bucs traded the 32-year-old Alou to St Louis in January, opening center for Oliver and first base for the slugging Robertson, who hit .438 in the 1971 NLCS with 3 homers in Game 2 alone.  Pittsburgh went on to a World Championship that season with Oliver as the regular center fielder, and led by Fall Classic MVP Clemente.

1972 saw Oliver break .300 for the first time, batting .312 with a career high 89 RBI.  Clemente reached a milestone 3,000 hits, and the Pirates captured a third straight National League East title before being turned away in the NLCS by the Cincinnati Reds’ Game 5 comeback.  The playoff defeat paled in comparison to what Pittsburgh would face 11 weeks later, when on New Year’s Eve a DC-7 plane carrying Roberto Clemente, a crew of three,  and relief supplies for Nicaragua earthquake victims crashed.  Clemente’s body was never recovered.

Oliver received the news about his mentor the following morning on a call from Willie Stargell.  By his own admission, it was three months into the 1973 season before Al recovered from the shock and began playing like himself again.  The same could be said of the Pirates as a team, as the Bucs stumbled to an 80-82 third place finish;  it would be the club’s only losing season of the decade.

Oliver took over Clemente’s #3 position in the lineup, and represented himself there well, with dignity and consistency.  Stargell said “All Al ever did was crush the ball.  He was the perfect number three hitter because you knew he was going to make contact”.  Tom Seaver was quoted as saying no one in the Pittsburgh lineup scared him more than Al Oliver.  Oliver banged out a then career-high 191 hits and 99 RBI in 1973, with 65 extra base hits, then topped himself with 198 knocks in ’74, including hitting streaks of 23 and 21 games, and won the team’s Roberto Clemente Award.  He tallied 115 doubles from ’73-’75, then hit .323 in 1976 , beginning a streak of 9 straight .300+ seasons. 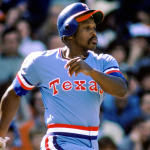 After the 1977 season Pittsburgh traded their three-time All-Star to Texas as part of a four-player swap that landed them Bert Blyleven and John Milner.  Oliver had plenty of hits left in his bat, finishing 2nd in the AL in 1978 with a .324 average while smashing 35 doubles.  He followed that up with a .323 mark in 1979.

Oliver was truly Mr. Consistency; in his first 14 big league seasons he registered 11 .300+ years, never hitting below .270 or striking out more than 73 times in a season.  He also had brief stints with San Francisco, Philadelphia, Los Angeles and finally Toronto, where he hit .375 with 2 game-winning hits in the 1985 ALCS.  Al finished his career with a .303 average and 2,743 hits.

Al and his wife still reside in his home town of Portsmouth.  Their son, Aaron Oliver, was a wide receiver for Texas A&M and caught the first touchdown pass in Big 12 History, and is now a teacher in Texas.  In 2013 Al Oliver was unanimously appointed by the Portsmouth City Council as “Mr. Ambassador” for his work as a public speaker with the purpose of “furthering moral standards, self-esteem and community enrichment as an advocate for Senior Citizens, War Veterans, and Youth Organizations”.   Al clearly lived up to his mentor Roberto Clemente’s standards as a consistent, modest and winning baseball player.  Rarer still, he has joined Clemente in making a mark as a top professional athlete who is an exemplary role model and humanitarian.

Joe Gersbeck is a baseball historian and lifetime fan/student of the game who lives in New Jersey with his wife and two sons.  His second book is 1970s All-Star Baseball: A History of the Decade’s All-Star Games , available on Amazon: