In 1970, the World Champion Baltimore Orioles had 3 20-game winners, a feat that had not been accomplished since 1956. 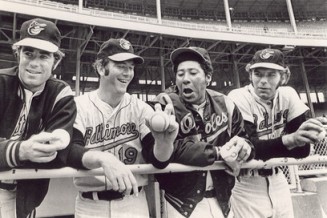 Lefthanded screwball specialist Mike Cuellar went 24-8, Dave McNally, another lefty who was once credited by Mickey Mantle as having the league’s best curveball, was 24-9, and future Hall of Famer Jim Palmer went 20-10.  It would be the first of 8 20-win seasons for Palmer in the decade.  The trio would be the only starters for the O’s in the post-season, leading a 3 game sweep of Minnesota in the ALCS, and a 5 game World Series over Cincinnati, where the Reds were held to a .213 batting average.

The following year, in 1971,  Baltimore traded San Diego for 6’3″ righty Pat Dobson, who put together a 12 game winning streak during the season and ended with a 20-8 record.  Dobson joined McNally (who went 21-5), Cuellar and Palmer (both 20-9) in the rotation as Baltimore became only the second team in baseball history with 4 20-game winners, and the first since the 1920 Chicago White Sox.  The Orioles again went with the three man rotation of Cuellar, McNally, and Palmer in the post-season, with Dobson working out of the bullpen.  They swept Oakland in the ALCS before being turned away in 7 games by Roberto Clemente and the Pittsburgh Pirates.

Those same Oakland A’s won the World Series in 1972, and in 1973, in the middle of their 3 year World Championship run, became the next team in the majors with 3 20-game winners.  Catfish Hunter went 21-5, and was joined by left handers Ken Holtzman (21-13) and Vida Blue (20-9).  The trio bested Baltimore’s Palmer, Cuellar, and McNally in the ALCS, with Hunter outdueling Palmer 3-0  in the decisive 5th game.

In some ways that series was the end of an era.  Oakland went on to outlast the New York Mets in a 7-game World Series.  Notable was the fact that Rollie Fingers, the game’s first true star relief pitcher, pitched in 6 games and actually led the Oakland staff with 13 2/3 innings.  The following year, Oakland again reached the World Series, this time against Los Angeles 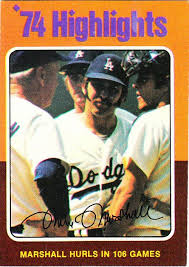 and their Cy Young Award winner Mike Marshall, a relief pitcher with 106 appearances during the 1974 regular season.  Marshall pitched in all 5 games, allowing 1 run and striking out 10 in 9 innings, Fingers had 4 appearances and was the Series MVP with a win and 3 saves as Oakland prevailed 3 games to 1.

Now, 40+ seasons later, no team since that 1973 Oakland A’s team has ever boasted 3 20-game winners, much less 4.  It may never happen again, as 4 man rotations and complete games continue to fade from our memories.  The foundation for this transformation, perhaps a long time in coming, was clearly cemented during those 2 Octobers.

2 thoughts on “Your Grandfather’s Rotation”